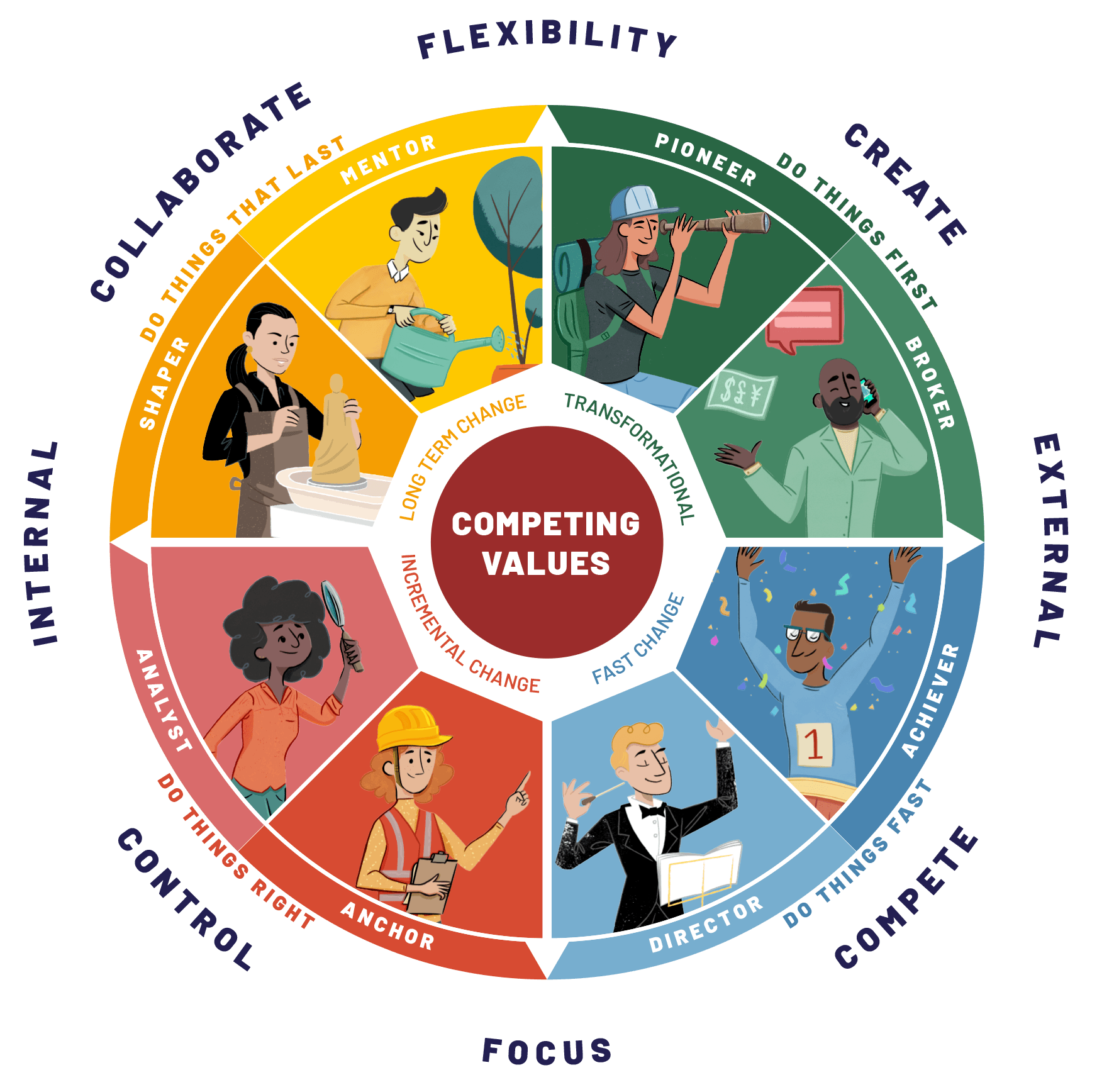 Which Personality Type
Fits You?

The word ‘persona’ is derived from Latin, where it originally referred to a theatrical mask. The most common meaning of persona however is the public image people present to the world, perhaps in contrast to their real character.

Hence, personality types do not necessarily describe real people. However, they are based on real data collected from multiple individuals. In effect they act as ‘stand-ins’ for individuals, adding the human touch to what would largely remain cold facts based on research.

So, what's your Personality?

The Big 5 Personality Test is the best psychometric test there is at predicting success in life and careers. Take our free personality test to discover what truly motivates you and the dominant personality traits that make you who you are.

Find out about Pioneers

Brokers enjoy making new contacts and maintaining existing relations. They are communicative and open. They are able to exert influence and make use of their networks to get results.

Find out about Brokers

Achievers are task-oriented and focused. They make high demands on themselves and others. Competitive and able to tolerate stress, they continuously aim high and track their results.

Find out about Achievers

Directors are long term thinkers, focused on the future. They seek to clarify expectations through processes, planning and setting goals. They tend to be an initiator who defines problems.

Find out about Directors

The Anchor maintains the structure and flow. They are trustworthy and reliable, and focused on tasks such as organising and coordinating efforts of the team, dealing with logistical issues.

Find out about Anchors

Analysts know what is happening by breaking problems apart to see all the alternatives. They focus on gathering information and data, and looking at situations from different perspectives.

Find out about Analysts

The Shaper promotes cooperation and teamwork. They are typically process-oriented, contributing to cohesion and morale, establishing participation and promoting team problem solving.

Find out about Shapers

Mentors achieve success by developing people through a caring and compassionate approach. They are helpful, caring, sensitive, approachable, open and fair. Mentors listen to others.

When you create personality profiles of typical or atypical (extreme) people, it helps to explain behavioural, motivational and attitudinal patterns, which synthesises the different types of people that generally exist. That’s why Personality Types are also known as model characters or composite characters that help to identify a meaningful pattern that allows us to predict others’ actions, so we can tune our own behaviour. 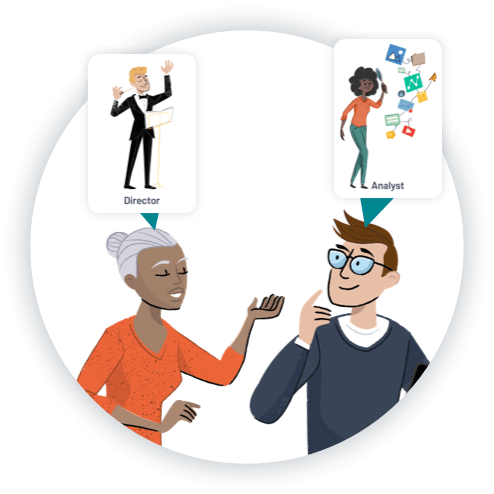 But even just the title of this personality type allows us to understand the motivation of this type of person (“we need to focus on change to discover new opportunities”), behaviour (“let’s think laterally for a moment”) and attitude (“let’s find a novel solution to that challenge”). 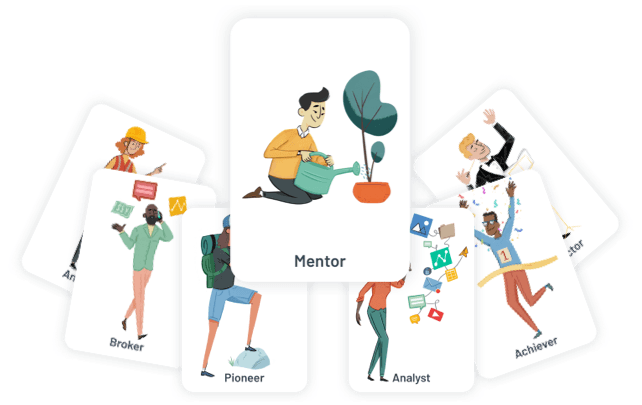 An unexamined life
is not worth living.

When we analyse personality types in detail we eventually strip off the theatrical mask, and discover that what seemed to be individual is actually collective; in other words, that the persona was only a mask of a collective psyche.

Personality types are not therefore a reliable basis upon which to make informed career decisions. 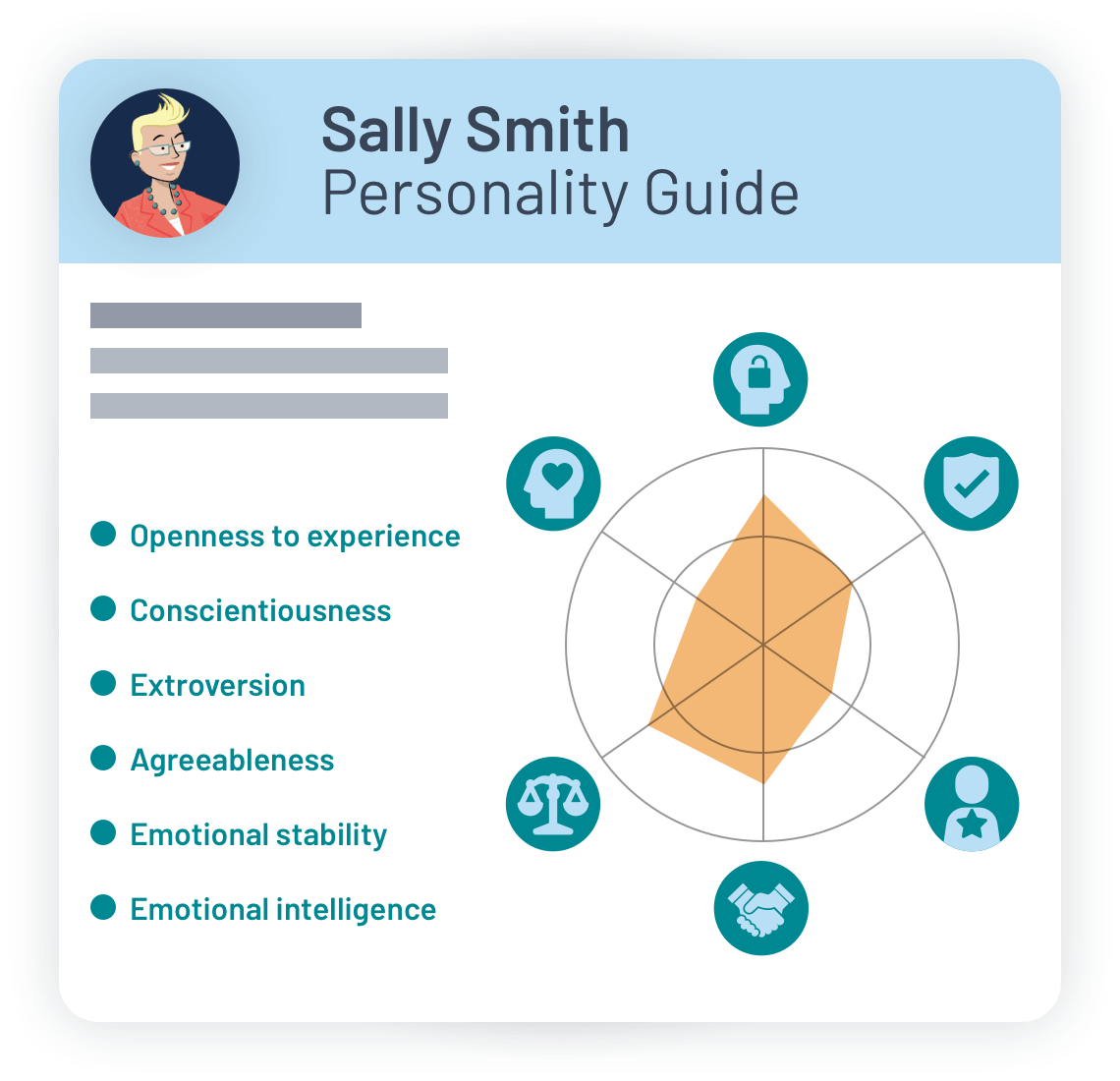 Fill in the blanks.

Which is why PeopleHawk® provide candidates with their own unique 6-page Personality Guide that measures and reports on what scientists believe are the 12 leading personality traits and work styles required to best predict future performance.

PeopleHawk’s Personality Guide also benchmarks each candidate’s results against the general population of PeopleHawk® candidates for comparative assessment. It is this detailed, personalised assessment that forms the basis of informed reflection on oneself and discussion with others, such as colleagues, or current and prospective employers. 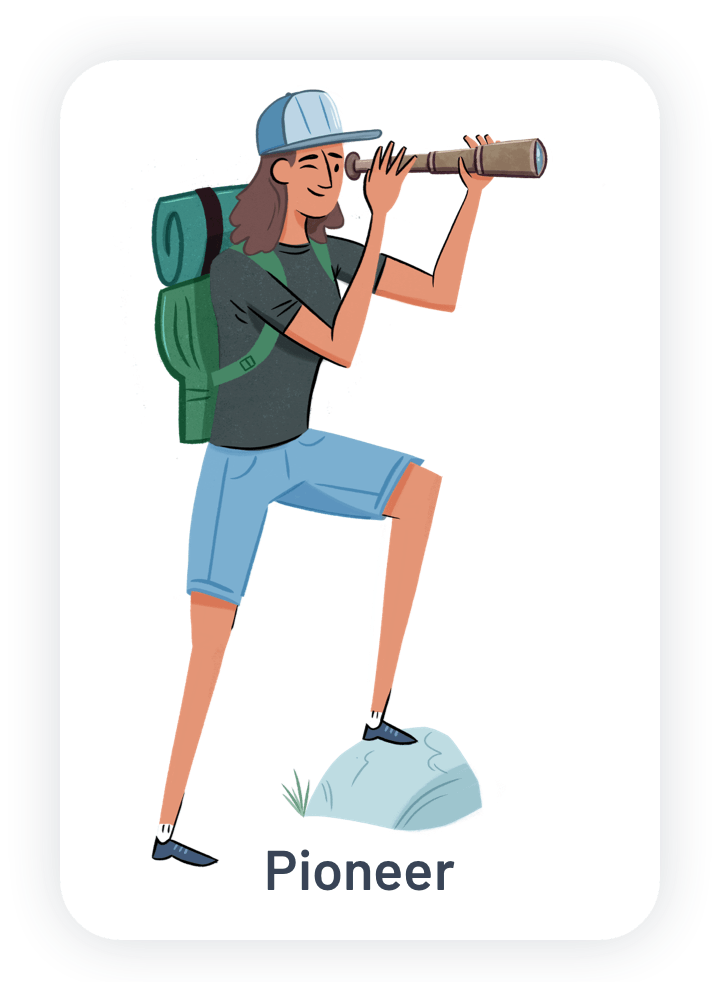 Pioneers enable change and adaptation, and pay attention to the changing environment. They spot important trends, express ideas, anticipate change, and tolerate uncertainty and risk. They rely on facts, ideas and intuitive understanding. The Pioneer is creative and visionary, and is able to look ahead. They can propose innovations in an inspiring way, and can convince others that these innovations are necessary and desirable.

The Pioneer is usually someone with a vision and is willing to take risks in achieving this vision. 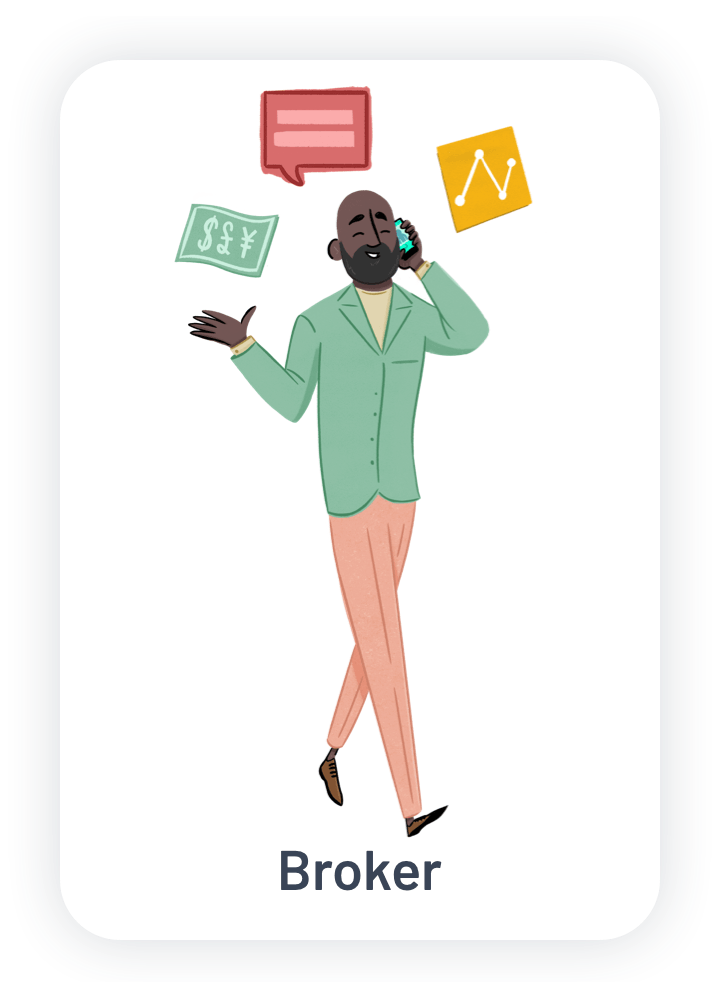 Brokers enjoy making new contacts and maintaining existing relations. They are communicative and open. They are able to exert influence and make use of their networks to get results. They are open to opportunities and forging partnerships. Image, presentation and reputation are important. They are politically sharpened and persuasive, and tend to have influence and power.

The Broker is effective as a representative, negotiator, liaison, spokesperson and acquirer of resources. They are competent at selling ideas. 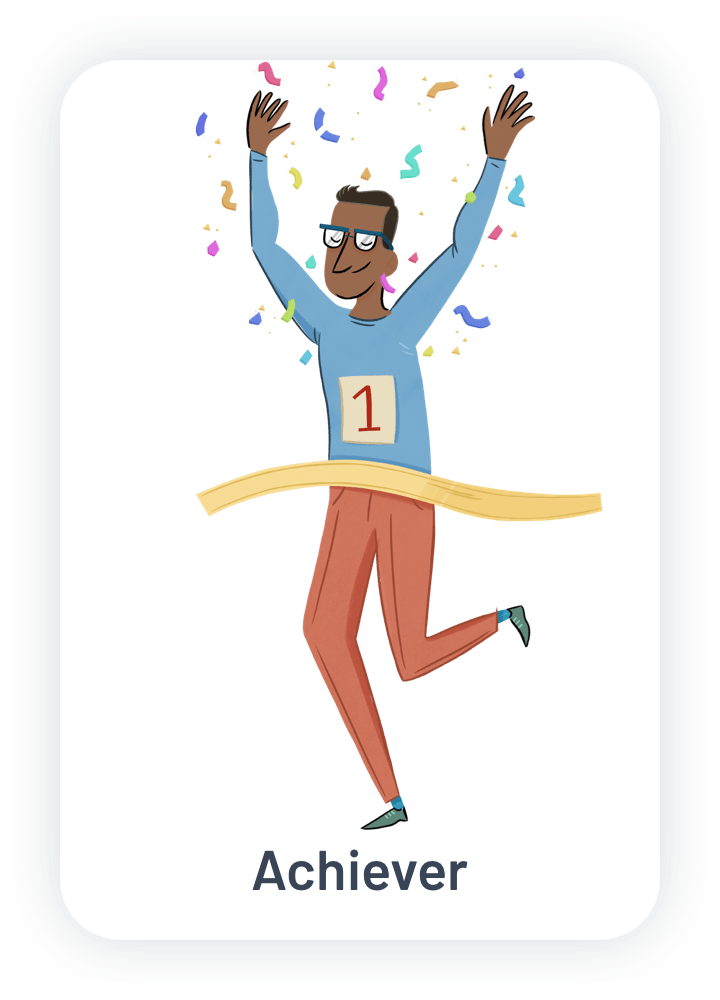 Achievers are task-oriented and focused on work. They make high demands of themselves and others. Competitive and able to tolerate a lot of stress, they are continuously aiming high and measuring their results. Achievers show great commitment, and are typically motivated and energetic. They are adept at bringing assignments to a successful conclusion and have a continuously high productivity.

This usually means their colleagues are motivated to increase their own production to achieve goals. 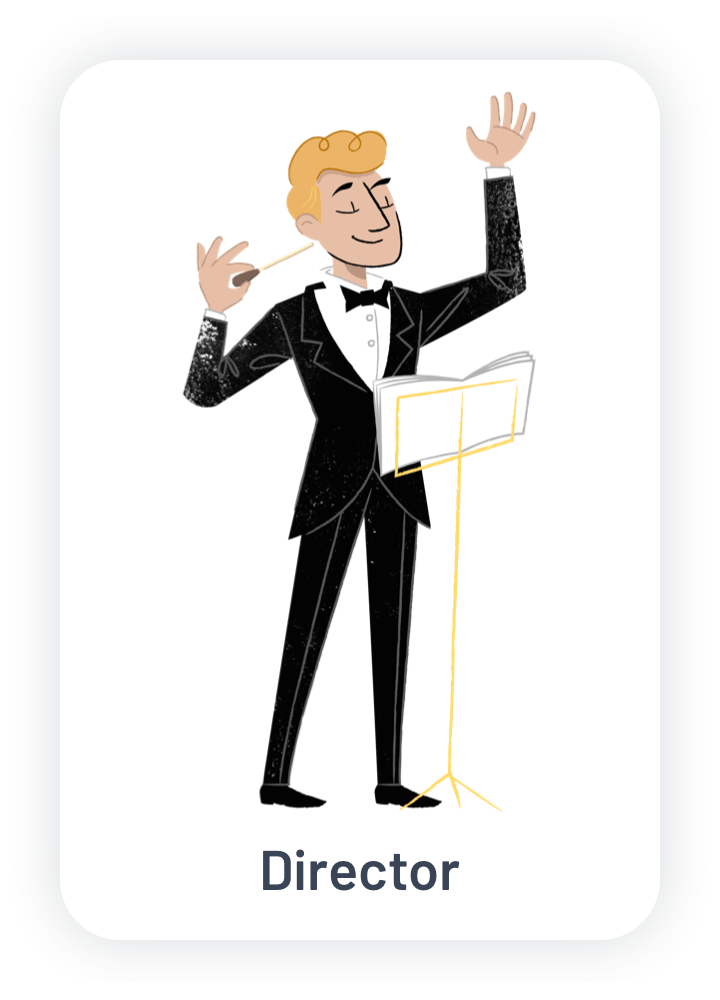 Directors are long term thinkers, focused on the future. They will naturally seek to clarify expectations through processes such as planning and setting goals. They tend to be an initiator who defines problems, selects alternatives, assigns roles and tasks, makes rules and policies, and gives instructions. Directors are often competitive, fast-acting decision makers, who make their expectations clear. Their employees know exactly what is expected of them.

Typically Directors are very sure about the fact that sometimes people just need to be led. 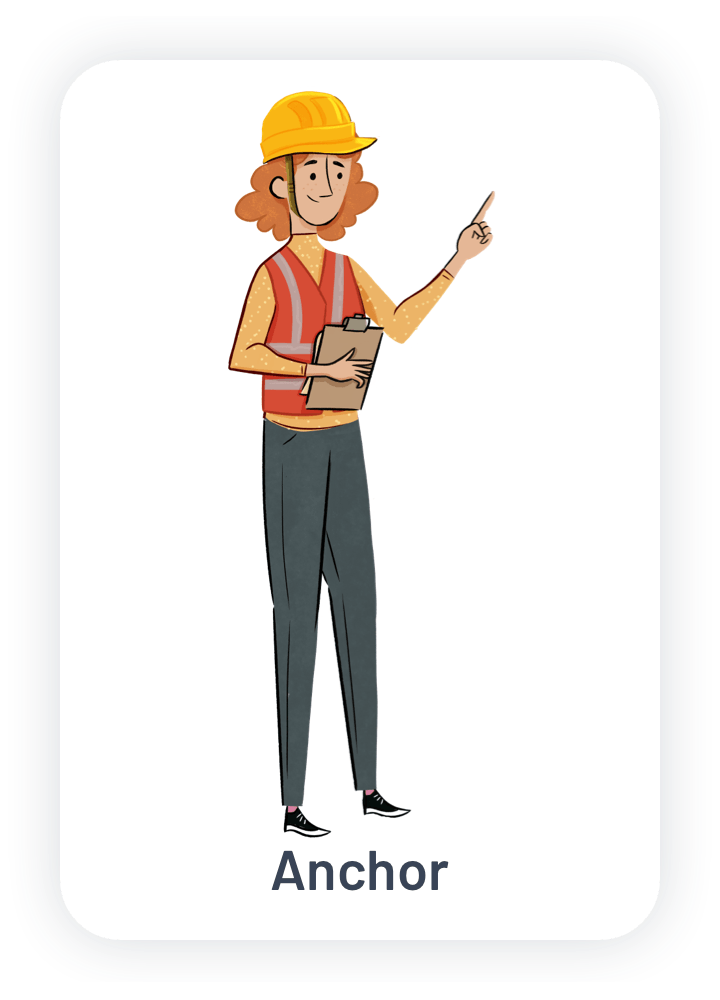 The Anchor maintains the structure and flow in a system. They are trustworthy and reliable, and focused on tasks such as relieving workload, organising and coordinating efforts of the team, dealing with crises and technological, logistical and administrative issues. Anchors are most happy when they are introducing structure or implementing procedures. They see themselves as system builders and people who create order out of chaos.

They show great commitment and enjoy nothing more than the feeling of accomplishment from getting the job done. 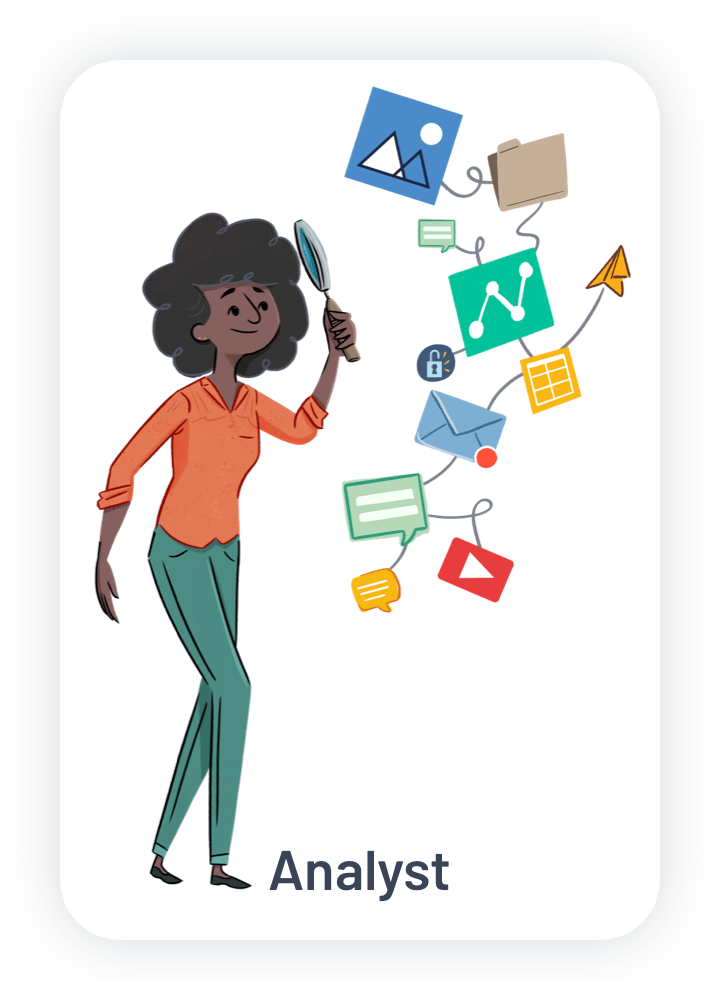 Analysts know what is happening by breaking problems apart to see all the alternatives. They focus on gathering information, dealing with facts, being rational, and looking at situations from different perspectives. They show great enthusiasm in handling administration, examining and responding to routine information and making reports and other documents. They examine whether progress is on track and make sure production targets are met.

These are the people in the organisation that are ‘the voice of reason’. 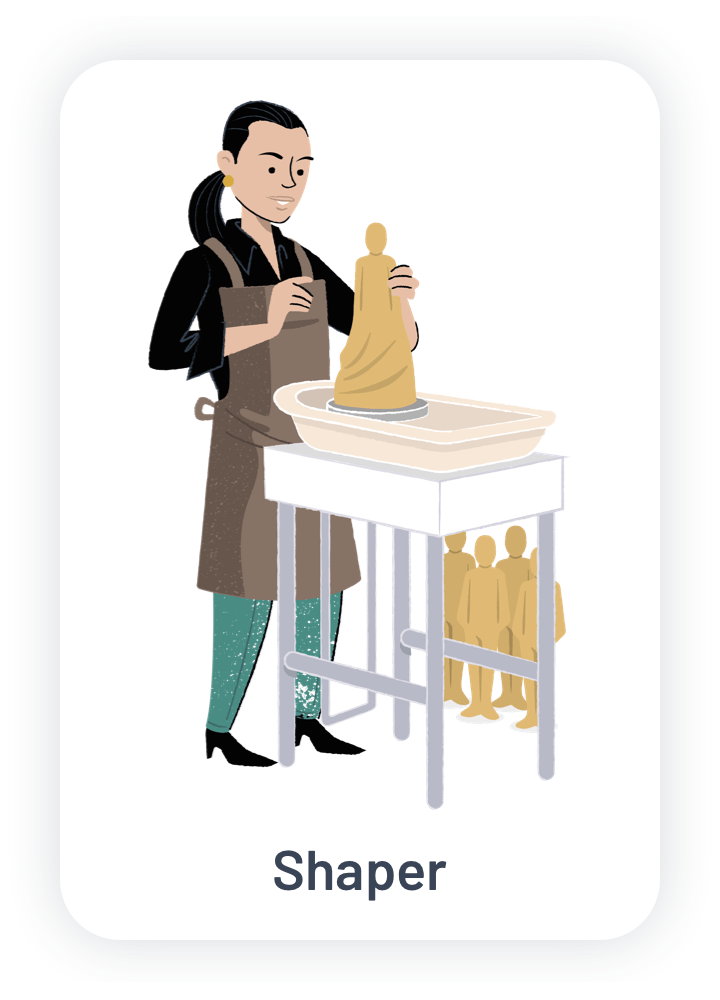 The Shaper encourages cooperation and teamwork. They are typically process-oriented, contributing to the development of cohesion and morale, gathering information, establishing participation and promoting problem solving by the team itself.  They are skilful at techniques to reduce conflict. Shapers are the binding elements in an organisation. They maintain team harmony, and keep the atmosphere upbeat and supportive.

Shapers manage to put people first, but they can also handle confrontation and challenge. 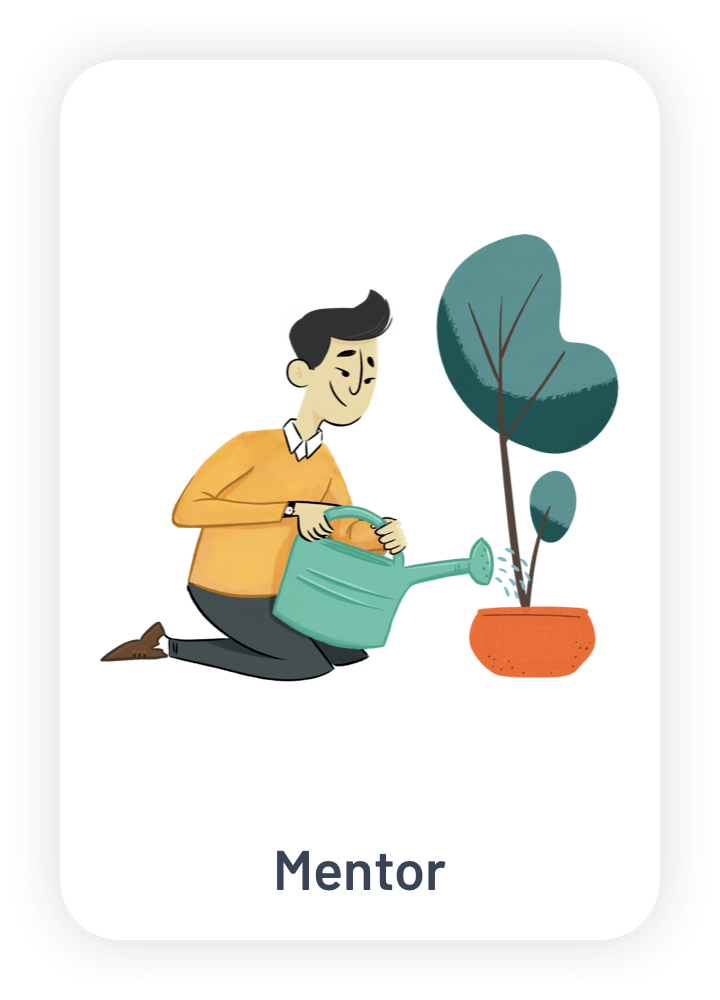 Mentors are engaged in the development of people through a caring and compassionate approach. They are helpful, caring, sensitive, approachable, open and fair. Mentors are understanding and take the time to listen to others. They typically have high levels of empathy and sensitivity. Mentors improve communication, develop others, and help them achieve their full potential by fostering opportunities and plans for individual development.